L. Anne Thompson is a self-taught photographer with a BA in Technical Theater and minor in Art History. Since 2013, she has taken many mixed media courses with Tamara Laporte, Jane Davenport, Alena Henessy, Teesha Moore, Tangie Baxter. In 2017, she joined Sebastian Michael’s Photoshop Artistry Grunge and Awake classes and is member of Sebastian’s Kaizen group.

Her work has been exhibited around Seattle, including her “Pair Go” series, on permanent display at the Seattle Go Center; “Krampus” photos and mixed media paintings were featured at the Bedlam Coffeehouse in December 2015 and she was the featured artist at the Artfx Gallery Summer 2016 with her series called “Zeus’ Women.”

Zenflowers, with bees. Digital art, created in the GIMP

“Up the Down Staircase”

Dress Like a Woman. Drawn in graphite, scanned and colored digitally in GIMP 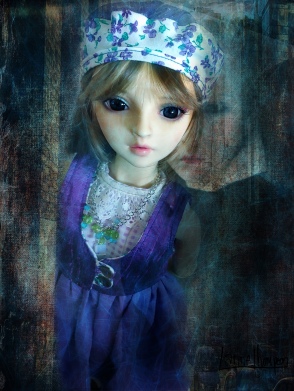 “Keaton on her Mind”